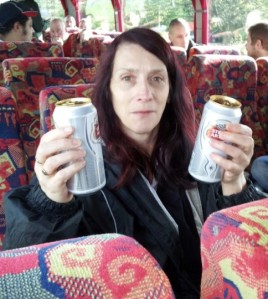 The days when the EDL could gather 1,000s of supporters and create a media splash are long gone as yesterdays ‘national’ demo in Luton proved. Even with Tommy Robinson faking  another attack they simply did not get the numbers they expected and the media generally ignored it. The EDL posters immediately regurgitated the same excuses for the poor turn out claiming ‘1500 EDL, some coaches turned away by the police’ and  ‘the cost of travel and the weather contributes to low turn out as well for these protests.’ There were also ‘20 EDL coaches turned away by police. That is 1000 people.’ That is, if they existed, and that is if they were full because some of the photos showed coaches like the Nottingham division as half empty. Others did not go because of inter-division fall outs (Bolton divs have declared war on some of the local ‘Angels’) and others missed their coaches because they were still in bed.

Several EDLers expressed their anger online at ‘keyboard warriors’ and the general apathy of those who had not turned up. One coach charging 20 quid a seat had to up the price by a fiver because of the no shows, that is, a fifth didn’t turn up! Many others did not go because they have defected to the Infidels, have been prevented by plod and cannot afford another nicking or have simply grown bored of the EDL’s posturing because the EDL have achieved absolutely nothing! They have cost local councils millions, been shown in a totally negative light in the UK media and have exposed absolutely NO radical Islamists whatsoever. They have been shown up as drunken, inarticulate hooligans, the links to Breivik were reignited with Mr. Tommy’s ‘frog impression’ on the crap programme about him and the beardy Islamist and he looked like a twitchy opportunist on a chat show and could not argue his points. The EDL seemed to have dropped the ‘radical Islam’ aspect and are now openly opposing all Muslims. One cyber tramp on the forums yesterday claimed that the EDL still has Jewish, Sikh and Hindu followers which is nonsense: none of the photos of recent demos have shown this and they look more like a soccer mob than ever, especially when draped in the St. George rags clutching plastic pint pots of lager.

The ‘Malatestas’ were monitoring the usual web forums yesterday which proved pretty unremarkable. The tweets and reports started coming in from the EDL coaches celebrating with their royal couple, Stella and Charlie, from about 8am. By the time many of them got to Luton they were already drunk. 1 bloke was arrested pretty much straight away and the stewards had a hard time marshalling the ‘troops’ as they started throwing fireworks and smoke bombs about. One of the stewards said “stewarding was a nightmare” due to “a fair few wrongens.” (thanks Xtras! http://twitpic.com/9hpkwu ), a forum poster said ‘shame the twats on the march having a row within group!! Thought we are all on the same side’ and ‘was near Kev and he saw some twat throw a can at the police and he grabbed him and pushed him out where we held a twat and took him to the Police.’ Oh dear! There were a few more altercations with plod but luckily Bedford’s finest had called on 20 other forces to help, which is ridiculous, and imposed a booze ban between 12 and 5. However, the EDL had already ‘strong drink taken’ and there were pubs serving them before the march. Well done plod!

Mr. Tommy did his usual ‘rousing speech’ which saw quite a few people leave and more defected when Karaoke Kev Karol got up to demand that George Galloway be hung (Kev was looking a bit worse for wear as he is now living in a caravan behind his local Sainsbury’s).  Mr. Tommy was also announced as deputy leader of fluffy fascist British Freedom, which was started by exBNP members ‘Batty’ Lee Barnes, Simon ‘Plug Puller’ Bennett and Peter ‘Gay Dad’ Stafford. They tried to hold a press conference but no one turned up so they had to throw all the crab sticks away. See our friends on EDL News:

Why the Fluffies want to be associated with voters of this caliber is beyond us!

… Those results in full. Here are the Fluffies results from the recent local elections. Hopefully Mr. Tommy being a convicted woman beater, violent football hooligan and ex-convict will boost the numbers!

Very poor. Be seeing you!

Malatesta aka M. Testa, undercover anti-fascist blogger, has analyzed the changing fortunes of the British far right for nearly a decade. He has given lectures on anti-fascism, published articles in Anarchist Studies and Freedom magazine and wrote Militant Anti-Fascism: 100 Years Of Resistance (AK Press 2015) which the Morning Star called a '‘Potent Primer On Europe’s Anti-Fascist Struggle … a useful source of information about the fight against fascism.’ http://www.akuk.com/index.php?_a=product&product_id=7285
View all posts by malatesta32 →
This entry was posted in Uncategorized. Bookmark the permalink.