The Vultures Of Rotherham #3

What a depressing and thoroughly expected surprise that the EDL’s demonstration in Rotherham over the child abuse scandal ended up in public drunkeness, infighting, confrontations with police and a breakaway group rampaging through the town causing damage.

1 EDL member tries to remember which way up a V-sign is.

The EDL have been vulturing over the appalling tragedy of 1,400 victims of serial abuse and had set up Camp Skanky outside Rotherham police station calling for SYPCC Shaun Wright to quit. This would have been more effective if Wright actually worked in that station. However, by the time the EDL realised their error, they had already pitched a few crap tents from Argos and one member started a hunger strike between pies, sandwiches and cans of beer, so it was too late to admit they had got their ‘facts’ wrong. Again. As we have shown in earlier articles, the camp soon turned into a drunken party that did NOTHING to help any of the scandal’s victims but simply boosted the EDL’s feeble egos by getting in the paper and on the telly thus appearing to give their atrophied and shrinking organisation a much needed boost. Of course, like everything the EDL does, their protest and demonstration soon turned into a joke (a joke as unfunny as any of Jim Davidson’s).

The EDL’s protest was a dismal exercise in embarrassing public drunkenness. Members had been asked to remain sober, and not be photographed clutching cans of Stella, to keep their protest dignified out of respect. Why people need to be told to maintain sobriety at 11AM whilst holding a dignified demonstration is a bad sign. But just like The 4 Tops, they can’t help themselves and so their demo degenerated into confrontations with police, a breakaway from the main group attacking a mosque, and the usual infighting that gave antifascists the only good news from the day. Their demo started off with various groups assembling in Rotherham optimistically expecting 3,000 to attend. Plod maintained there were 1,200 but according to the photos of the day this was clearly untrue. They had inflated the numbers to justify the 1,500 police on duty, many from other divisions, who, despite outnumbering the EDL, still couldn’t control them. Something for South Yorkshire Police to add to their piss poor record of incompetence.

The NWI Had To Stand With NF To Boost Numbers

It is evident that between 6-800 showed up. Included in this rabble of drunken violent eejits, were various members of the BNP, NF and Britain First. Even the tiny Infidels groupuscule made an appearance which remained less than impressive as most of them are still in prison after a 10 strong attack on 2 young antifascists and their dad. Of course, the EDL attacked the NF like they did the other week and then they all ended up attacking each other despite calls for Far Right Unity – although what far right unity has to do with any of the 1,400 victims is unclear. The BNP were also very quiet over the fact that whilst the scandal was happening, they had 2 councilors  in Rotherham who also did nothing (like all their councillors).

As usual the EDL stewards failed to control the violence and yet again, Dave ‘Made In Britian’ Bolton was attacked. He really should give it up as this is the 4th time he has been battered by his own ‘racial comrades.’ The police drew their batons and forced the EDL back, whilst some of them were wielding metal poles, and tried to contain them. This was a partial success as 200 later broke out and ran amok.

It was interesting to see Kate McDermody, formerly of the useless British People’s Party, demanding that sex offenders be hanged. We presume this does not apply to her friend and former BPP member Martin Gilleard who is in prison over sex offences.

The EDL, like everyone else, are right to be angry with the perpetrators of this abysmal situation, and to protest against child abuse, a sentiment we can only agree with. However the EDL racialize the situation and forget that ALL sex offenders are vile. As 1 EDL member said: ‘Find every rapist, prosecute him, jail him, seize his assets to compensate as best as possible his victims. Then deport him’ – yes indeed, including the ones in the EDL ranks about whom they remain silent:

The EDL also ignore other child abuse cases that are perpetrated by white people (see ACAB blog below). So, the post-demo fallout is going to be interesting as they try to justify themselves and all the violence, shouted racist abuse and the hijacking of other peoples’ misery. And what did the EDL achieve in Rotherham? Absolutely nothing except making a bad situation even worse. Well done. 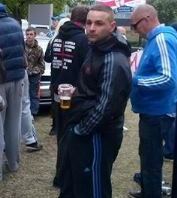 EDL Onanist Divsion: Stella in 1 hand, nob in the other.