Late last night, I got a message from an anti-fascist comrade asking for advice to give to a young female activist who was being harassed by fascist bullyboys. These cowards are the kind who pull women’s burkas off in the street and are typical of the EDL, NWImbeciles, NF etc., who like to terrorise women living on their own or with their kids. Not only that, but they also like to send the vilest, most misogynistic abuse to women usually from fake accounts on Facebook, although some of the following we know all too well. 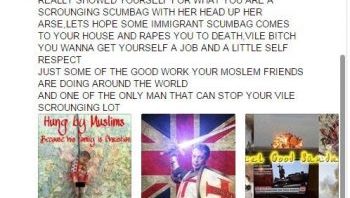 Depressingly more abuse to be published shortly. Do not underestimate how cowardly, hateful and disturbing these psychos are. In Solidarity to female comrades everywhere. Mal

Malatesta aka M. Testa, undercover anti-fascist blogger, has analyzed the changing fortunes of the British far right for nearly a decade. He has given lectures on anti-fascism, published articles in Anarchist Studies and Freedom magazine and wrote Militant Anti-Fascism: 100 Years Of Resistance (AK Press 2015) which the Morning Star called a '‘Potent Primer On Europe’s Anti-Fascist Struggle … a useful source of information about the fight against fascism.’ http://www.akuk.com/index.php?_a=product&product_id=7285
View all posts by malatesta32 →
This entry was posted in Anti-Fascism, Fat Lisa, Rob Gray, Shane Calvert, Shane Calvert is going to prison ha ha ha!, Uncategorized and tagged 'Malatesta', Eejits!, Fat Bastard Nazis, Infidels. Bookmark the permalink.