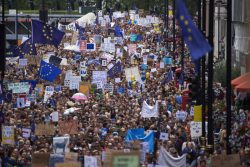 On Saturday, 1,000s of people across the UK joined the March For Europe, urging the government to delay initiating Article 50 for Brexit until the terms regarding economic, social and political relations with the EU are explained, clarified and in everyone’s interests, not just those of Tory elites, insular racists and fuckbucket UKIP mediocrities. Of course, the Brexists just claimed ‘Nerr, Nerr! We won, get over it’ and yet again, failed to understand the complexity of economic reasons behind it all.

Well, the reasons the marches took place were that the referendum was only advisory and is neither law nor  binding;  there is no figurehead leading the UK out of the EU; there is no exit strategy for Brexit; and Brexists have little political cohesion beyond voting the same in a ‘Yes/No’ vote.

‘Right fuck off! I’m getting pissed!’

The referendum was enormously influenced by the migration row and many failed to realise that problems with benefit cuts, NHS, public services, unemployment, housing shortages, and lack of resources are not to do with ‘immigrunts’ but austerity programmes, originally initiated in 2008 under Labour and continued by the coalition and Cameron’s government. Billions of pounds of public money have been spent bailing out the banking crisis and it will not be repaid so the money has to be recouped from elsewhere, that is, public spending.

As far as immigration in the EU is concerned, 100s of 1,000s have had to flee wars that the UK helped initiate in Afghanistan, Iraq, Syria, Libya and so on, and it is immoral to refuse help to the people whose livelihoods you have just destroyed: ‘We just came to help you by blowing up your house and country, but don’t come round mine asking for a free lunch!’ Think about it: what would make you leave your home, your clothes, cars, pets, family, jobs, neighbours, etc., and flee anywhere you possibly could?

Anyway … We got a really good response from a friend of ours about this article that very much merits inclusion here:

DM: ‘I can see within six months Brexiteers asking for a second referendum , because day by day we see and hear bits of the Governments plans and more and more these plans are not going down well with the leavers, you see all though most people realise that all we voted on was should the UK stay or leave the EU, but many leavers believe they voted for more than that , many believed that where voting for an Australian style points based immigration system, well that has been shot down in flames, many believed that a leave vote would put a total end to EU migration . but according to the government the reason they don’t want a points based immigration system is that it doesn’t give them the power to control the number of EU migrants , so it looks like there will still be EU Migrants, many farmers voted leave because they where told that a Brexit vote would not effect their subsidies, now the government have guaranteed their subsidies till 2020. But we will not activate article 50 until 2017, so we wont leave the EU till 2019, so their subsidies have been guaranteed for less than 12 months, and as more and more of the Government plans come out more and more Brexiteers are becoming disillusioned.’

Mal: ‘I think they expected it to be law. It isn’t, its advisory: should we leave or not? That’s it. With head Brexists leaving, Cameron giving up instead of leading his govt thru it, and Theresa May overwhelmed by being PM, no one has a clue.’

DM: But How much better is Boris , how strong is Boris’s will to leave the EU, this is part of his record, in 2006 , he made a documentary called the dream of Rome , in which he praised the expansion of the EU and championed the call for Turkey to be accepted as a member, earlier this year at the start of the Referendum Debate he said ” A leave vote would be good , as it would put Britain in a Stronger position to negotiate a better deal to stay in ” , in and Interview for the BBC countryfile programme During the debate , he said in response to a question about the Unskilled EU migrants that British Agriculture has come to rely on ” Post Brexit any EU citizen coming to the UK with a Job offer would be welcome” And Just this week during a visit to an English Language School in Warsaw he told young Polish students that he looked forward to welcoming them to the UK.

Mal: The correlation between Donnie Fashco aka Trump and Boris goes beyond crazy hair do’s: they will say whatever they think pleases at the given time.

GM: Brexit is very unlikely to happen. Brexists are full on deluded. Everything they were promised was retracted within an hour of Brexit winning the vote. No one expected the vote to go the way it has and now people are left scratching their heads wondering how to solve a problem like Brexit. I’m all for democracy, a lot of people just throw the word around without understanding it’s meaning. I’m not bitter or angry, I’m amused by it all. It’s all a bit Dads Army.

Malatesta aka M. Testa, undercover anti-fascist blogger, has analyzed the changing fortunes of the British far right for nearly a decade. He has given lectures on anti-fascism, published articles in Anarchist Studies and Freedom magazine and wrote Militant Anti-Fascism: 100 Years Of Resistance (AK Press 2015) which the Morning Star called a '‘Potent Primer On Europe’s Anti-Fascist Struggle … a useful source of information about the fight against fascism.’ http://www.akuk.com/index.php?_a=product&product_id=7285
View all posts by malatesta32 →
This entry was posted in Anti-Fascism, Fat Lisa, Rob Gray, Shane Calvert, Shane Calvert is going to prison ha ha ha!, Uncategorized and tagged 'Malatesta', 2016 Referendym, anti-Brexit, Antifa, Eejits!, refugee crisis, refugees. Bookmark the permalink.