May The Farce Be With You!

UK Anti-Fascist Women! Kicking The Fash Off The Street Since Always!

In July, 2016, EDL supporter Kevin ‘Bunny’ Crehan (below) was jailed for a year over attempting to defile a Bristol mosque with bacon sandwiches. He was found dead in his prison cell on 27/12/16 although the cause remains unclear. 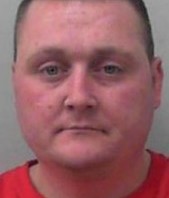 We have always maintained that far right groups are, or act like, criminal gangs, and the EDL are no different: original leader Tommy Robinson is a career criminal jailed for assault, football hooliganism, using a false passport, and major fraud, none of which were political. Crehan was also a career criminal with 55 separate offences on his record. And he wasn’t the only far right member to die in prison recently: neo-Nazi goon Nigel Sullivan (below) got 13 years after attempting to rob an OAP but once in prison he was attacked with boiling water and sugar before hanging himself.

Sullivan: The Only Good Nazi …

Crehan wasn’t the 1st or last to be done for the juvenile act of defiling mosques with bacon: in June, 2014, 2 SDL members were jailed for it and in November, 2016, 2 Polish eejits were jailed for the same thing. The far right are ‘outraged’ that pork based antics are ‘illegal’ when in fact the problem is the vicious racial abuse, physical intimidation and deliberate offensiveness that goes with it. If pork was ‘illegal’ then no doubt EDL members would be smuggling sausages into prison via the usual methods.

The tiny Poo & Mash made-up ‘firm’ of failed hooligans and drunks are organising a demo in ‘support’ of Crehan so the few dozen slags left at EDL HQ are going along in support. Desperate for attention as always, Robinson is trying to move in on the demo and the EDL extremists he once abandoned – like he abandoned the BNP, British Freedom, Quilliam, and UK Pegida, as well as his wife and kids whilst in jail or gadding about like a twat. The EDL are engaged in full-scale digital bitching, tearing each other to bits, and denying it all on the information superhighway as usual which anti-fascists have found most amusing!

Every death in custody is tragic and exposes the lack of support, mental health provisions, counselors and medical staff available to prisoners, so maybe the EDL should be protesting about all suspicious deaths in police custody or prison rather than selecting Crehan for their bizarre version of martyrdom. May the farce continue!

NB: we do not necessarily endorse all the views espoused in the above  links.

2 Responses to May The Farce Be With You!