Crivvens! Jings! And Help Ma Boab! Whit a week we’ve had and it’s only Wednesday!  In case ye didnae know, slab-faced fat-necked racist Paul Golding and Jayda ‘Fransen the Barbarian’ of Britain First were jailed today for being total woodentops. They had ‘exposed’ an Asian Grooming Gang, i.e., they read about it in the paper, so decided to target who they thought were the suspects but, being the bucket feeding eejits they really are, they got the wrong guys. Fransen was sent down for 32 weeks and Golding for 18 but only because he said it was all her fault, that he was just the ‘cameraman’ and she had threatened him with her giant chesty busticules. He also claimed to be ‘teetotal…’ 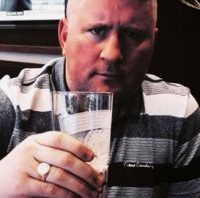 Golding’s Perfect Evening: a pint, a rant, then 1 off the wrist!

Fransen said that she was just trying to ‘protect the children of this country’ but I’m pretty sure parents throughout the UK don’t need a pathologically racist and religious lunatic cosying up to their bairns. Golding and Fransen also have charges for being utter fuck-bugles in Northern Ireland from last year which could be more jail time.

Not only that, but the EDL were stunned by the exposure of yet another vicious sex offender in their ranks. There has also been a total lack of leadership and last year the few dozen remaining members had to choose between irate racist jailbird Alan ‘Fuckface’ Spence or Ian ‘Smelly’ Crossland – which is like choosing between someone pooing in your pint or someone whacking off into it (you decide which one’s the wanker).

Meanwhile, soccer team enthusiasts the Football Lads Alliance (FLA) are heading for a confrontation with breakaway faction the True FLA: Democratic Football Lads Alliance. The DFLA were muchly dischuffed with FLA leader John Meighan appropriating all the money that hundreds of suckers sent in for tacky t-shirts and flags made in China. But the main problem for these soccer laddies is their demo in Birmingham in April which both factions are claiming as their own so there’s gonna be scuffles aplenty! Along with the usual complaints about ‘egos, backstabbing, money…’ supporters from both factions are calling for ‘Unity!’ but as seasoned anti-fascists have long observed, the chances of the far right maintaining a unified front are as remote as Smelly Crossland giving his ballbag a rinse, i.e., never. 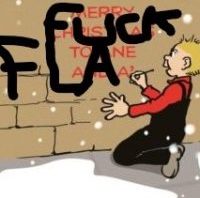