Tommy Slapped Up! Jay-Ding Slammed Up! 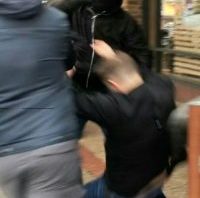 Crivvens! Jings! And Help Ma Boab! The Arsehole Formerly Known As ‘Sir Tommy’ turned up at an anti-fascist meeting at the weekend and was amazed when he got an unfriendly welcome – but he’s been milking it ever since whilst failing to explain why he instigated an obviously volatile situation. And for someone with a long and violent criminal record, who has encouraged violence against Muslims, and was filmed in a violent altercation in Rome (where does he get his holiday money from, eh?), to then complain about violence puts him way beyond the valley of the eejits.

Not only has poor ‘Sir Tommy’ been greeting into his halal Nando’s, he has found yet another political organisation to leech off and is hovering near the petty cash tin of Generation Irritation – whose logo (right) really is pants:

‘Sir’ Tommy’s political fickleness is guided by money (as he has no job) and a pathetic need for attention. Since 2004 he has joined/abandoned/tried to get in with …

Given such an obvious and appallingly opportunistic ‘career,’  we reckon he’ll be with GI for a year at most until some other money squeezing possibility emerges.

In other news, Jayda Fransen and Paul Golding – aka Jay-Ding – are still in prison but only because their royal pardon is still in the post. Britain First (which is now just toothless gimmer and useless criminal Andrew Edge) are still lying their arses off claiming that Jay-Ding have been unfairly treated even though they were jailed for harassing someone they had misidentified as a sex offender. Which they denied. Because is it was true. So they went to the Majesties priz. What amused a lot of anti-fascists was how ‘Ding’ blamed ‘Jay’ for everything in court saying ‘What me guv? No way. I don’t even know her. And anyway, even though I was there, which I wasn’t, I wuz actually in Greggs getting me sausage rolls, pies, cakes, crisps, and a small diet lemonade.’ Apparently they’re not talking to each other. And hopefully, ‘Sir Tommy’ will be joining them soon. 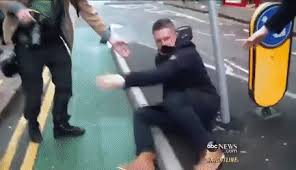 Finally, we would like to thank all of our friends and readers who have supported us since 2010. We are the only long-running, independent, anti-fascist blog. We don’t want yer money but please cut and paste the link and help spread the word. Cheers, Mal.