Tommy Robinson Is Not Innocent! 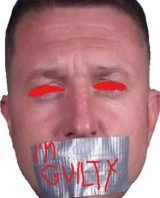 Crivvens! Jings! And Help Ma Boab! Whit’s going on? The Free Tommy Robinson campaign is not only futile but based on a collective delusion  because

HE ADMITTED HE WAS WRONG IN COURT

But this hasn’t stopped the campaign getting oot and aboot in London in considerable numbers today but sadly all that sunshine, beer, and al fresco entertainment with Jerry Springer wannabe Geert Wildebeest and former Undertones singer Ann Marie Sharkey went to their heeds and it all ended rather badly. The EDL Violent Demo Re-enactment Society decided to revive their ‘Glory Days’ and fought with plod but, as usual, naive demonstrators failed to remain sober and didn’t mask up thinking that putting a t-shirt over their faces for 5 minutes would fool the cops. Footage has quickly spread through social media which will no doubt lead to mass arrests, as has happened several times before.

The recent large scale mobilisations by the Democratic/Football Lads Alliance have boosted the confidence of the UK far right at street level but they have 1 significant problem: who will speak for them? No charismatic leader has emerged from the D/FLA to capitalise on their success to deal with the media. The very public fall-outs and schisms have been embarrassing but these have been over money, egos and control, and neither faction can offer much beyond organising yet another march.

One of the main reasons the far right want Robinson released is because he has been an effective spokesperson whereas For Britain’s Ann Marie Feargal is useless, Jayda and Paul Goldfinger of Britain First are a fucken liability, and the foggy leadership of the EDL now outnumber their followers. All of these factions were represented in London today along with a few Generation Tedium types and former National Action Men members who tried to avoid notice whilst being photographed by anti-fascists.

The Free Tommy Types claim that his 7th trip to the majesties priz is a free speech issue when it clearly isn’t. He got 13 months for contempt of court whilst he was already on a suspended sentence for the same thing, i.e., standing outside courts commenting on ongoing trials regarding sexual abuse thus risking prejudicing the trial.

Robinson has served many years in prison and the charges were nothing to do with politics but over violence, fraud and stupidity. Would people trust any other public figure with an abysmal record like this?

2011: Jailed for rooftop protest in Switzerland

2017: Convicted for contempt of court

2018: Jailed for contempt of court

We are the only long-running militant anti-fascist blog and if you could copy & paste the link where you can, well, mucho obligado. Mal.

1 Response to Tommy Robinson Is Not Innocent!