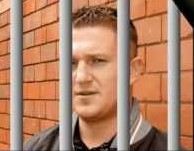 Crivvens! Jings! And Help Ma Boab! Whit a game! The Drama! The Anticipation! The Heartbreak! Yes indeed, let us never mention playing naked Twister with Nanatesta again. Apart from just now. And a bit later on down there.

But whit’s going on? Well, ‘Sir’ Tommy Yaxley Trousers is still in the majesties priz whilst all his little Tombliboos are whinging away about it being an infringement of free speech (it isn’t), that he is a political prisoner (he ain’t) and that he is innocent (he is not). Norman Stanley Robinson is serving his 7th prison sentence but is appealing against it and his ‘authorised spokesman’ Ezra Levant has assembled the Super Justice League to prove that everyone is wrong!

Anti-fascist researchers exposed Robinson’s links with Zionists in the early EDL days with Alan Lake lurking behind him, then he was hanging about with the horrible Pamela Gellar before getting freebie trips to Israel. Thompson Stanley Felcher is clearly getting funding from somewhere as he hasn’t had a job err… ever. His current legal situation is explained here: 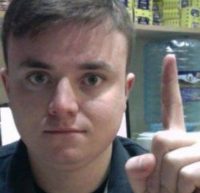 Jack Renshaw: ‘So, who’s going to the majesties priz for ages?’

Meanwhile, at the Old Bailey, the National Action trial is ongoing. The prosecution alleges that the 6 accused remained members of NA after it had been proscribed by the government which they deny. 1 of the accused is Jack Renshaw, an odious little racist shagspot, who has pleaded guilty to preparing an act of terrorism after buying a machete to kill Rosie Cooper MP and also admitted threatening to kill a lady plod who was investigating possible ‘evidence of child sex offences or grooming.’

Renshaw: 2nd trainers from the left

We were following The Independent’s rather good live coverage of the trial which suddenly disappeared after press restrictions were reinforced due to other ongoing related cases. Renshaw is an interesting wee fellow, and by that we mean a nasty inadequate fantasist who makes Kevin Layzell look impressive.

Renshaw was involved with the EDL, BNP, and National Action; he was hoofed out of university for being a racist twat-spindle; he tried to join the army but was rejected as he’s scared of loud bangs; he served as a tea-boy at the Women’s Institute; then, despite being 39, he joined paramilitary Christian group ‘The Cubs’ but was kicked out for garnishing his woggle with a swastika. Given his current legal status his future, like England’s World Cup bid, is proper over! 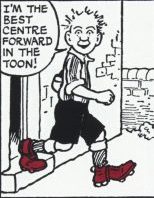 But anyway, things be getting busy as anti-fascists mobilise in numbers for Donald the Trumpet on Friday and the Anti-Tommy demo on Saturday in London. Good luck to all. This is a link to Anti-Fascist Network for more details:

Sadly, we can’t make it as we’re relocating the yurt away from the midgies to the inside of Nanatesta’s caravan! So, it’s bye bye Perth! We’re heading for the thrill of Rhyll! 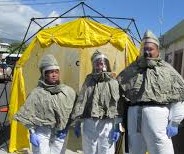 Left to Right: Me, Mac & Nanatesta about to fumigate the yurt. 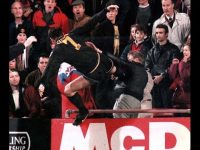